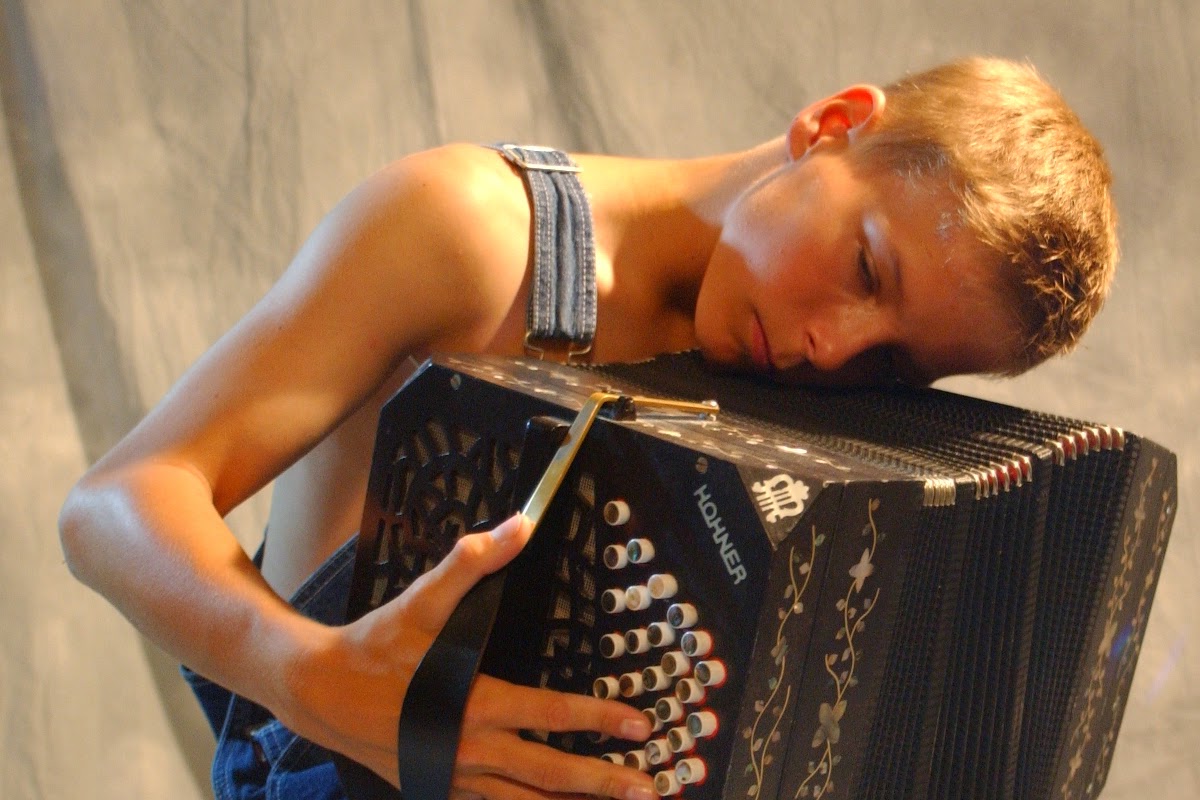 Sara is my closest friend.  No one can replace the kind of friendship we have.  She's a breathing, living being.  Sara is my bandoneón.   I know that it is strange to say this, but surely I am not the only one who holds the wonderful delusion that the mystery of life dwells in an inanimate musical instrument. I didn't have to court Sara. She courted me. She accepted me as a beginner and allowed me to learn who she was inside. While doing that I found out who I was inside. If only more couples could do this!

Sara has a personality all of her own.  Compared to any other instrument I know, the bandoneón is truly like a person.  Maybe I am mad, but I feel her presence most when I just listen to her breathe.  I open her smiling case and let her breathe in my embrace.  Her smell is the perfume of wood, enamel and a touch of oil reinforced with years of having given me so much joy or having helped me during times of sadness.  She smiles with delight as I open up her case.  She leaps into my arms, ready to play.

Now that I think back, I am sure of it:  Sara looked forward to the times I had troubles with my romantic life.  That is when I made up new tangos and would play with her for hours.  This ritual started when my first girlfriend, Elena, had left Montevideo to live in Buenos Aires with her parents.  I was so broken hearted, but when I pulled out my bandoneón, only then I realized how bad it hurt to have my first love move away.  My bandoneón was a channel to the emotions that I hid not only from the world but from myself.  I embraced Sara and she consoled me.

The day Elena left, I sat with my bandoneón on my lap, but I couldn’t play at first.  I was numb.  I just opened and closed her bellows and let her breathe with me.  I felt her empathy, her soul. Eventually a vals came out as powerful as I ever had played – Desde el Alma.  This was tango.  Its essence.  My heart ached and now I could speak from my soul about this music that my parents so loved.  Now tango was truly my music, not just my parents' music.


When I came down from my upstairs room, everyone looked quizzically at me as they sat at the dinner table.  I thought that perhaps they all could see that I had been crying, and I felt this horrible shame of being the youngest and still just a baby.  Mother took away these fears:   “You have never played your bandoneón like that before,” she said.  Father didn’t say a thing.  I saw his powerfully tacit pride in his eyes.  He squeezed my shoulder as I sat down next to him at the table.  He said so much with his eyes that words were not necessary. He told me later what he was thinking:  Another generation would carry on his beloved tango, the pride of Montevideo.  I felt as if it were my mission now, like the keeper of the fire in ancient tribes.

How is it that we forget about important moments in our lives through the distractions of daily life?  When I turned seventeen, I was so busy with school and many friends that I slowly neglected my bandoneón until I nearly had forgotten her.   When I was twenty-five, doing graduate work at the Universidad de Montevideo, a friend told me about some Japanese tourists who would give me a pile of money for my old bandoneón. "You never play it," he said.  It was Christmastime, and I wanted to get my mother a nice dress.  I knew exactly what she wanted because I was with her when she tried it on, even though she knew that she could never afford it.  I saw the delight in her face, and then the melancholy of having to take it off and put it back on the rack.

I so wanted her to have that dress, but it meant selling my bandoneón. What bothered me most was the thought that the Japanese tourists were only going to display her on a table somewhere, and Sara would not be played.  Finally, I justified my sentimental thoughts, telling myself that I probably would never play it again anyway.  At the last moment before I sold her, however, I decided that I would keep her smiling case.  I guess that was my way of keeping a part of her and then get the money too.

When I turned 50 years old, I started dancing tango for the first time.  I felt as if everything I ever knew as a musician was still there.  I felt just as alive when dancing as when I had played music in my youth.  Sara had internalized herself into me.  My lungs were now her bellows.

In the tango world, I had new friends and a new passion in my life.  People at work noticed that I was a new person, with a new lease on life.  Later, I was lucky to have this community of friends-who-embrace when my parents died, the biggest loss of my life.  I was numb.  I felt as if I didn’t deserve having such great parents, and now they were gone!  My two brothers and my sister were far away, but luckily I had these friends – mostly from the tango world – who would embrace me and be present with me in my grief.  My lonely, heavy-hearted task was to go through all my parent’s belongings at their house.  Every little thing was full of memories, and I was on an emotional rollercoaster, and each box was a new loop on that rollercoaster.  Ironically, I could not cry.  It was terrible.  No release.  Just a dark hole.

As I was boxing up things at my parents' house, I found Sara’s case smiling case in the attic.   How stupid I was to open the case thinking she would still be there inside of her case!  How stupid, my shock when I opened the case and she wasn’t there!  She could no longer breathe in my arms!  I could not play a melody and harmony on her.  I could not console her and promise her never to neglect her again!  But she was gone!  Just like a drunken fool, I sobbed onto her red-velvet bedding, which seemed to intensify the smell of her haunting enamel-wood-and-oil perfume.  It was a deep, pitiful sobbing at first without tears, but then all the tears of all my losses throughout my life seemed to let themselves pour out.  How long it had been that I had not wept!  The torrent, I guess, came from years of machismo-glue that had clogged up my tear ducts and artificially holds my man-self together.

I cannot know where Sara is now.  I only hope some little Japanese kid learns how to play her, and that she will breathe for him, console him.  For now, I console myself by imagining that she sings to me whenever I hear the bandeón as I am dancing tango.  I console myself that my parents see from heaven that their beloved tango lives on only when it is danced as so many milongeros have said. I have continued in their hope. Tango lives on because of dancers--those who are truly moved by the music.  I am carrying the tribe’s tango-fire ember.  With every tango, with every tanda, Sara’s voice seems to go more and more to the core of my soul – desde el alma. It took a while, but I have found her--and at Christmastime.  Sara no longer is the bellows in my chest.  She is embodied in my partner, my wife, who knows the real me, just the way I am.


_________________________________________
Author’s Note:
This essay is fiction but is tied to a real experience as a teenager.  Here are the elements that are not true:  I did not grow up in Uruguay, and I do not play the bandoneón.  But it is true that I sold a marvelous, upright piano for my mother's Christmas gift.  It is true that I went out to play her one evening when I was alone at home, and she was no longer there.  I was shocked and wept.  The last part--feeling more like a musician through dance than playing an instrument is absolutely the truth.  Finally, the shining light of hope at the end is true:  I have found someone like Sara, but truly a person in my wife, Sybille.

Mark Word
Originally written in Germany near the birth of the bandoneón in Rheinland-Pfalz, Germany