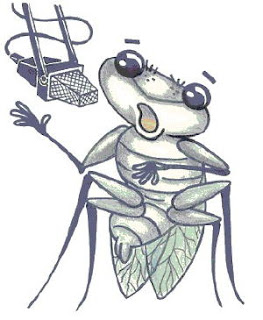 The Chicharra is a sound effect that violinists, cellists, violists in tango orchestras create by using their bow on the "wrong side" of the bridge right below where they usually bow the strings of their instrument.   (Below, you will see and hear how the sound is made.)

Tango composers use this unusual sound very much like the popular percussion instrument used all over Latin America, the güiro, a little gourd washboard instrument.

May I put a bug in your ear?  But please listen to what the cicada has to say.  She sings out a variation of an often implicit rhythm in tango, and she predicts how the whole tango piece is going to be played out.

If you love tango, you will immediately notice this sound, but now let's see an example in a live orchestra and then in a following video clip, we will see exactly how it is properly made by the violin, viola or cello:

This second video is rather technical but the clearest example you probably will ever see!


Some believe that the chicharra is a more modern invention, but of course it was used in the Epoca de Oro (Golden Era) of tango as well.   Here's an example of Alfredo D' Angelis, using the chicharra very much like a typical güiro rhythm.  (Start listening at about the 70th second mark.)  And at the very end of this post, I have a picture of how arranger notated the chicharra and it's typical rhythm.

The bug in your ear:
Dancers can learn a few things from the wise cicada. The chicharra seems to know the 3+3+2 rhythms of Africa and Middle East.  This morning I played the first video clip above for my 14-year-old son and asked him to tap out the rhythm that pervades the song.  The chicharra gave him the best clue, and he continued with that (until he got bored and left).  He and his brother are musicians, too, and sometimes we play together.  In tango, at least, the chicharra always sings out or plays around with the same ancient rhythms (sometimes called syncopations) that have their center around 3+3+2 rhythms.  I am not sure who taught the bug her wisdom, but please noticed that the first video plays on the upbeat of this rhythm and then the melody follows the same pattern throughout the tango.  The second video demonstrates this essential rhythm of tango but on the downbeat.  (If you actually count 123-123-12, the "upbeat" is just to clap on all the 2's and the downbeat is to dance on all the 1's.)

This rhythm does not belong to tango alone.  Middle Eastern music often features this rhythm as well.  One could argue that the European Jewish immigrants brought this rhythm to Argentina (along with the German made bandoneón), but that is not entirely true.  Even the melodies to some tangos came directly from Jewish songs.  Isn't it interesting that the Jews were slaves in Africa and their heritage and stories are centered in Africa?   Please enjoy this video below, an example of sacred music using this essential rhythm:


Here's the a photo I took a live concert of the violinist's score of "Canaro en Paris," with the notation of chicharra, playing off the 3/3/2 rhythms mentioned above.  The chicharra is at the very bottom of the photo. 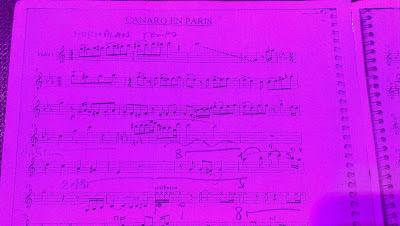