Tango, the Microbiome and the Coronavirus 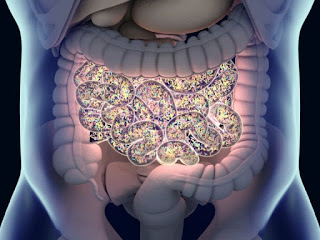 If you dance tango, you do it because it makes you happier.  The microbes in your body are dancing too. Literally dancing.

[I wrote this post before the Corona Virus pandemic started, but I had it in my drafts. The new meaning with a pandemic is this:  Many people will never return to tango. And many will deny the danger of a pandemic. Both of these things are unfortunate reactions. But I hope scientific knowledge will grow for the general public. For over a century, we have mostly misunderstood the significance of the discovery of microbes (bacteria), and the much smaller viruses, and fungi.  What we still do not understand--perhaps especially in the medical field--is that the vast majority of these microbes coexist with our minority human genome in our body. Did you know that many viruses are good for us?  Did you know that even fungi happily have a balance on our skin and mouths and everywhere else in our bodies? It is a matter of balance! When the pandemic is over, it will be best that you return to tango for your own physical and emotional well being.  You need social touch for a healthy, robust immune system.]

One reason that you may be coming back to dance is that tango dancers are likely to be happier and healthier from social contact than if they stayed home.  By "social contact," I mean not just psychological contact but also physical contact. A growing body of evidence shows that we return to eat and do things because our microbes are bidding these behaviors. Can it be that we are returning to dance and do many things at the bidding of the microbiome's influence on our behavior and even our personalities?  (See article below, "Gut Bacteria May Be Linked to Personality Traits.")

Luckily, dancing is good for us.  The other good news is that dancers are likely to have a more robust microbiome because of their close physical interaction with others. Sharing the good bacteria in social contact gives us a greater diversity of bacteria in our bodies. A person with less diversity is likely to get sick and depressed or anxious.  So yes, you are happier when you dance. Your heart and soul dance and your body dance. But there is more . . .

Your microbiome dances.
10% of all the DNA cells in your body indicate that you are human.  90% are all sorts of DNA that are not human.  Trillions of cells make up a huge "community" of diverse bacteria, fungi, and viruses.  Most of these co-exist with our minority human DNA and allow us to live well on the planet.  New studies are showing that people with a lack of diversity in their microbiome (helpful microbes throughout our body) have weaker immune systems and are more likely to be depressed.

People who lack a diverse microbiome have both more physical illnesses and also lack psychological resilience. So the diverse community in your microbiome is "dancing" and very happy when you have close social contact with each other.

Here's a wonderfully produced info video from NPR on the microbiome. It's especially helpful if you doubt that your microbiome really dances. :-)  (Or keep reading below the video if you have no doubts so far.)

Tango dancers are likely NOT to be germophobic. Germophobia creates more and more isolation and even more and more mental problems, especially debilitating Obsessive-Compulsive Disorder (OCD). The germophobe thinks he or she is justified in their permanent social isolation. Why not? For now over 100 years, the human race has grown more and more germophobic. But we only have seen half the story. The vast majority of our microbiome we have attained through physical contact is helping us survive! Look at our medicine and commercials of anti-bacterial products. We all know what anti-bacterial agents are. Even modern doctors have little sense of the harm they are doing to their patients by giving patients antibiotics, which kill the good bacteria (the majority) along with a few bad guys. And for what purpose? Why kill bacteria if you are fighting a virus? People-pleasing doctors are unwilling to educate a misinformed public because the American Medical Association has been in a senseless war on microbes without knowing the whole story, which has caused "superbugs." Except for epidemics, stop using antibiotics if at all possible! Stop using antibacterial sprays and soaps. Even children in households with no dishwasher are healthier than the more sterile environments of homes with dishwashers. And, of course, dance more tango.

New Vocabulary Words
The general public has not been able to talk about these truths until recently. If you know the word "probiotic" it probably is new to your vocabulary in comparison to "antibiotic." A recent study by Dr. Katrina Johnson in the Human Microbiome Journal looked at social behavior and microbes. She wrote: “Our modern-day living may provide a perfect storm for dysbiosis [microbial imbalance or maladaptation] of the gut. We lead stressful lives with fewer social interactions and less time spent with nature, our diets are typically deficient in fiber, we inhabit over-sanitized environments and are dependent on antibiotic treatments. All these factors can influence the gut microbiome and so may be affecting our behavior and psychological well-being in currently unknown ways,” said Johnson.

But not Tango Dancers, Dr. Johnson! We are a diverse bunch of people. In nearly every tango community I have been in, we share collectively five or more languages, nationalities. Racial diversity is common. But one thing we really share is our microbes, and 99.9% of the time this is very good for our physical and mental well being since microbiome diversity is so good for our physical well being. Generally speaking outside of epidemics, hiding out and avoiding social contact is dangerous for the body and mind.

So let your body dance as if no one is looking. The microbiome has been dancing as if no one is watching since the beginning of the human race--because we have hot been watching! It's only now that we are aware of this incredible dance. And now, we are finally watching. Hopefully, our microbiome won't get nervous.


Here is the article so you don't have to look it up:


Gut Bacteria May Be Linked to Personality Traits

~ 2 MIN READ
A new large study finds that some of our personality traits may be linked to the composition and diversity of our gut bacteria (microbiome). The findings are published in the Human Microbiome Journal.
“There has been growing research linking the gut microbiome to the brain and behaviour, known as the microbiome-gut-brain axis,” said Dr. Katerina Johnson, who conducted her Ph.D. in the Department of Experimental Psychology at the University of Oxford in the U.K.
“Most research has been conducted in animals, whilst studies in humans have focused on the role of the gut microbiome in neuropsychiatric conditions. In contrast, my key interest was to look in the general population to see how variation in the types of bacteria living in the gut may be related to personality.”
Prior research has linked the gut microbiome to autism (a condition characterized by impaired social behavior). Johnson’s study suggests that numerous types of bacteria previously linked to autism are also related to differences in sociability in the general population.
“This suggests that the gut microbiome may contribute not only to the extreme behavioral traits seen in autism but also to variation in social behavior in the general population. However, since this is a cross-sectional study, future research may benefit from directly investigating the potential effect these bacteria may have on behavior, which may help inform the development of new therapies for autism and depression,” said Johnson.
One interesting finding was that people with larger social networks tend to have a more diverse gut microbiome, which is often associated with better gut health and general health.
“This is the first study to find a link between sociability and microbiome diversity in humans and follows on from similar findings in primates which have shown that social interactions can promote gut microbiome diversity,” said Johnson. “This result suggests the same may also be true in human populations.”
Conversely, the study shows that people with higher stress or anxiety had a lower microbiome diversity. In addition, the researchers found that adults who had been formula-fed as children had a less diverse microbiome in adulthood.
“This is the first time this has been investigated in adults and the results suggest that infant nutrition may have long-term consequences for gut health,” said Johnson.
Diversity was also positively related to international travel, perhaps due to exposure to novel microbes and different diets. More adventurous eaters had a more diverse gut microbiome whilst those on a dairy-free diet had lower diversity.
In addition, diversity was greater in people with a diet high in natural sources of probiotics (e.g. fermented cheese, sauerkraut, kimchi) and prebiotics (e.g. banana, legumes, whole grains, asparagus, onion, leek), but notably not when taken in supplement form.
“Our modern-day living may provide a perfect storm for dysbiosis of the gut. We lead stressful lives with fewer social interactions and less time spent with nature, our diets are typically deficient in fibre, we inhabit oversanitized environments and are dependent on antibiotic treatments. All these factors can influence the gut microbiome and so may be affecting our behavior and psychological well-being in currently unknown ways,” said Johnson.
Source: University of Oxford

Posted by Tango Therapist at Saturday, February 29, 2020 No comments: