Yin Power in the Stillness of Tango 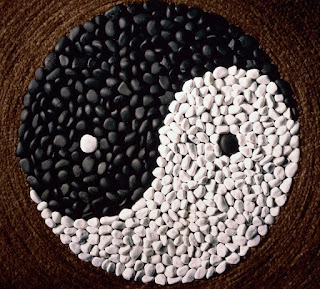 Yin is the unsung hero of tango's magic.

What people often watch and praise, however, is the Yang-action in tango.

Even in life, Yin is the unnoticed hero, in my opinion. I wrote the majority of this post about six months ago. When rediscovering the draft, I took away about half of it and now, I'll add something my wife told me about one of her favorite dance partners:  She said he had a way of building a feeling of preparation for the next move. Isn't this an example of Yin? That night the added description changed the way I dance.  (Yes, I listen to her descriptions of tango magic.) My wife noticed my change right away.

It is worth a moment or two to consider what this Yin energy is. Instead of thinking in male/female terms, here are two analogies of the Yin energy which promotes balancing these energies in oneself:

People notice movement, not stillness.
But stillness is the power that brings effective movement.

At tango performances watch how people tend to notice leading or ornamentos, but then fail to see stillness (which precedes, not "follows"). Women who so wonderfully embody Yin Power, which precedes everything I do, too often deny their important role.  They say, "I was just following what you led" after I say how wonderfully she empowered the dance.  How can Yang do anything without Yin?  Yes, and so in remains: Yin is the unsung hero of tango's magic.

When will the Tango Teacher Disappear?

Get ready!
If you love a subject and you are ready, the teacher will appear-- or so goes the saying.  But it's just not that easy. Most find that there is more to it. So...

Get set!
As a student, you will find teachers who will demotivate you or attempt to distract you from the good path you were on. Maybe you had a wonderful embrace or amazing walk that a new teacher has now "disassembled."  Now your latent talent must be recovered.  So the "get set"phase may slow your greatest desires.  It's just the fact in any human endeavor of learning that teachers can be a student's biggest obstacle.  On the other hand, if you have a lot to give as a teacher, many students will appear who will not be able to hear or find what you have to give.  It will all be worth it when the right student or the right teacher appears.

Lao Tzu answers this question in his wisdom for both teacher and disciple: