(The Unassociated Press)  The World Tango Federation!* recently attempted to patent the terms Leader and Follower.  However, the Unified Patent Court in the European Union has denied this attempt.  Other international patent legal bodies have followed with the UPC's precedence.  Through a patient lawsuit, the Ballroom Association Directorate (BAD), countered the WTF! attempt, and has won the patient for Ballroom teachers worldwide to have proprietary usage of the terms "leader/follower."  Tango teachers around the world have been ordered to stop using "leader and follower" when teaching the roles of tango couples by 2015.

Ballroom Association Directorate (BAD) unequivocally demonstrated that Leading and Following is
the domain of the traditional ballroom dancing and their pedagogic approach, and that they have been using these terms properly for centuries. Their spokesperson, Francis Strong-Frame, declared after BAD won the lawsuit was:  "Ballroom leaders get the basic thump of the music and then do combinations of bronze, silver or gold movements in any random order, and the followers obey these commands.  Tango dancers do not comply with these important requirements for true leading and following.  At the higher levels of ballroom dance, the true leader is usually a paid instructor/choreographer who dictates what the dancers are supposed to do.  Also, the ballroom dancer must demonstrate precise movements of how each move is to be executed, which are all codified in manuals.  This is true leading and following at the highest levels.  Tango dancers do not conform to these norms either.  It is unfathomable that tango teachers would even use these terms, but especially inappropriate that WTF! (World Tango Federation!) would attempt to patent these terms for themselves."  Mr. Strong- Frame added later, "We have never insisted on owning these terms, but now with this aggressive infringement from WTF, we have had to stand our ground."

I hate to tell you the bad news, but my dear tango friends, we tangueros and tangueras have to come up with something else than their trademark and patented teaching terminology of "lead and follow."  Please help!

BAD, rightfully so, has shown in a court of law, that what tango dancers are doing is substantially different than what ballroom teaches and practises for leading and following.

So, come on! We have to come up with something. Let's think! Murat and Michelle Erdemsel once in a class I took with them suggested avoiding the "F-word" (follower), replacing it with "Allow-er" That's a great start.   Sharna, another teacher, suggest "the keeper of possibilities."  Maybe the "keeper" for the rol feminino? Please send in your ideas. WTF/we need your input! In the last post/article, I suggested "Leader" be the music, which I still think is best. For the couple I suggested the terms "follower one" and "follower two" represent the respective roles of the couple. In discussion with some who read that article, I now think, however, that it'd be best to drop the word "follower" altogether in favor of a totally fresh start. My two cents: How about "listener one" (Yang role) and "listener two" (Yin role)?


Above is one of new series on a conversation about "leading-and-following."  Last week was the first of the series:  Both roles expressing intention:  The Power of the Mirada.

Starting back in 2010, however, I have visited this theme often:
Tarzan goes to Buenos Aires
Follower: A Job without Promotion
Tango: Man Talk / Woman Listen?
An article on women who are behind the beat, listening mostly to the man (with some great videos)
Don't let another man lead her
The first article on this theme in 2010:  "The End of Leading is Near"   The end wasn't as near as I thought.  :-(


P.S.  Of course I am being ironic (the literary word for "sarcastic as hell." In the past, I have written ironic articles and commenters have taken me seriously.  Sometime peoples drink wine and then start reading blogs.  Irony is sometime not easily detected while reading quickly or reading under the influence because the thesis is the opposite of what is stated.  Here are some clues about irony above:
1. "Ficciones en las noticias" (fiction in the news) is a hint.
2.  The Unassociated Press is not a true news service.
3.  WTF is an initialized expression indicating "astounding disbelief," and is short for "what the f**k are you thinking/doing?!!
Whether in irony or fact, don't you agree that it time that we come up with better terms just for the magic of tango?

*AFT (after-ther-fact) apologies to WTF (the World Tango Federation):﻿﻿
I did not mean to be prophetic.  After I wrote this article, someone pointed out that WTF (World Tango Federation) actually exists, and as my inner (and mostly silent) prophet predicted, WTF promotes tango-as-performance and tango for profit.   Here's their descriptive photo, which says it all so well:  Man to his woman:  "I am the leader, got it!  Submit!"  Notice also that the "non-profit organization" promotes only for-profit events, featuring stage stars, and very little about community development.  Pictures speak loudly.  Clearly there is a leader and follower here; a dominant/submissive: 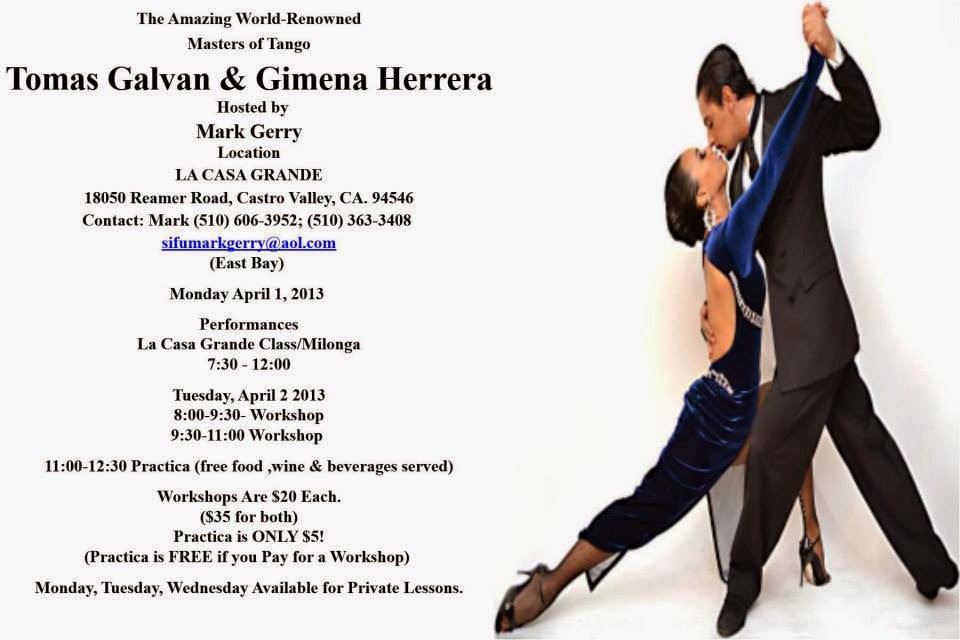 Other than cool moves, the man-on-top position is the "mission": 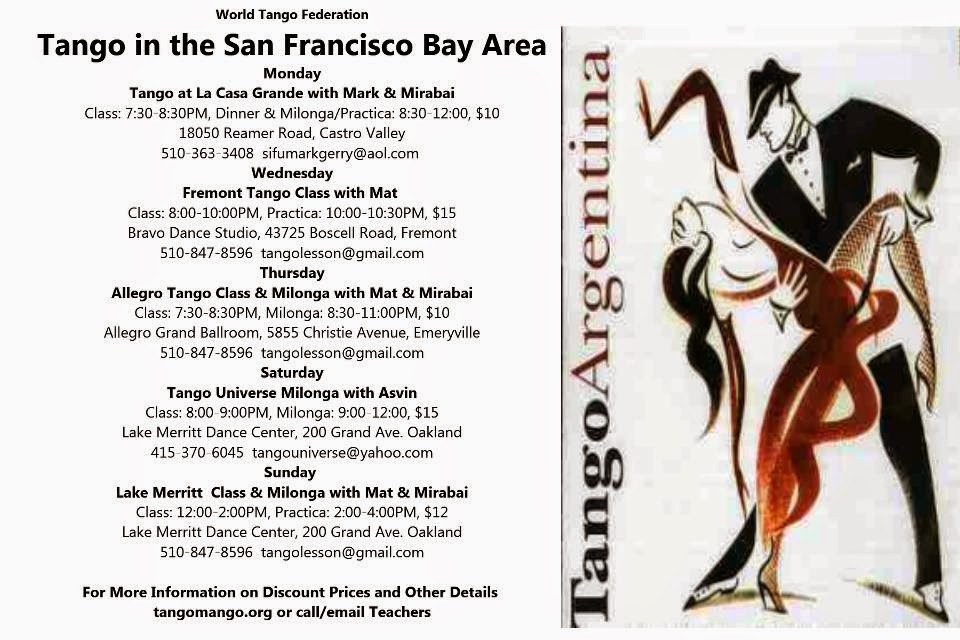 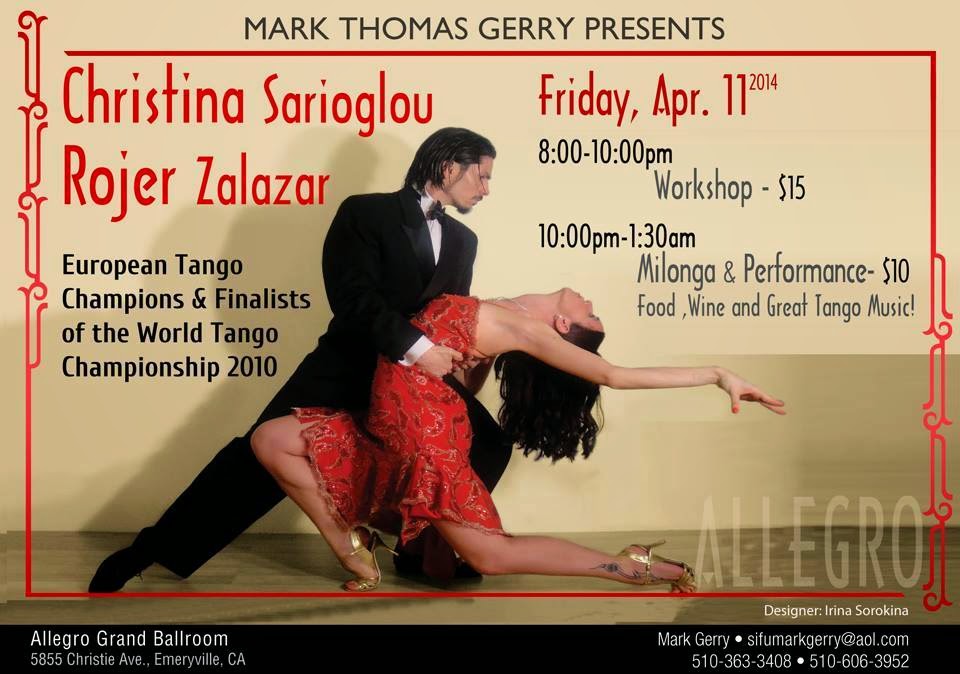