Finding your other half in tango 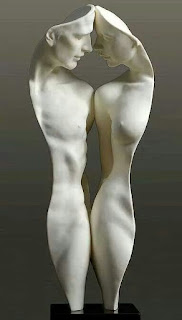 Find your "other half" in tango!

I do not mean finding someone to accompany you to tonight's milonga.  If you are searching for your "other half" (or even "better half") in another person, you are likely to find another half person!

A tango friend, Eric, and I were talking this week, and I was struck by his story of how he once was a bit introverted before he danced tango. In spite of his mild introversion, he somehow became a good public speaker, saying that he had to prepare to speak in public by taking on an extroverted persona, someone unlike himself.  He recounted how he would talk to himself to prepare himself before a speech: