Mirror, Mirror on the Wall…

So who is the greatest tanguero of them all?
Answer: Not the one watching the mirror! 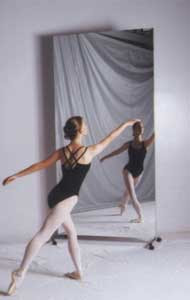 Last week, I wrote something about how Latino salseros too often would be searching for their next dance partner or anyone watching their coolest moves. And I mentioned that women both in tango and salsa are too often watching the mirror. The comments that came from Buenos Aires were, at first, that MEN watch the mirror there, and women have their eyes closed. Then an expatriate tanguero living in Buenos Aires spoke up to say that the women indeed were watching the mirror there too. So one thing I learned from the many comments – not paying attention to your partner is not a gender-specific problem.


I think people keep coming back to dance tango not for how it looks but how it feels.  Yet, there is a natural desire to see how it looks because it feels so nice.  The draw of mirror is fascinating, and is not easy to explain.

Three mirror stories come to my mind about bodily self-reflection:  Consider Narcissus, a handsome half-man/half-god.  He falls in love with the person he sees mirrored by the pond.  Although many may not know Ovid's story of Narcissus, most adults know his name through the often-used word "narcissistic."  The second story that comes to mind is the Märchen (fairy tale) recorded by the Grimm Brothers, a story most Europeans and Americans know:  Schneewittchen ("Snow White").  And a newer story, published in 1997, gives us a great magical object called The Mirror of Erised, which is a mystical mirror discovered by Harry Potter in a back corridor of Hogwarts, his school. On this mirror the words inscribed, erised stra ehru oyt ube cafru oyt on wohsi, are the reversed letters of "I show not your face but your heart's desire."


Which of these stories best fits the person who watches the mirror while dancing?   Maybe there is an element of all three stories in this natural draw to look in the mirror.  However, I think that people do not look at mirrors during a milonga because they are being full-fledged narcissists, nor are they inquiring about who is the most beautiful/handsome at that moment, nor do they see their desire rather than their true image, as in with the Mirror of Erised.  But this is the danger:  Watching a mirror at a milonga will give you seven years of bad dancing!  Please note that this urban myth first started here!  ü


It is not easy to break the habit of looking in the mirror because mirrors are generally a good thing in our lives.  Besides the obvious loss of attention and poor dancing caused by mirror-watching, a very important and very old tango rule is being shattered:   Looking at the mirror breaks the rule of not instructing at a milonga.  Usually we think of not instructing others, but mirrors are a type of self-instruction and self-focused information.  The issue, then, really is not a our friend the mirror.  The problem is self-instruction at a milonga, leading to a lack of attention to the music and to one's partner.

The Light and the Dark Side
So if you find yourself dancing with a mirror-watcher, who is this partner?  Maybe Sigmund Freud would say that you are dancing with Narcissus, or Snow White's Stiefmutter, or simply the object of your desire.  Wrong, Mr. Freud.  But good try.  No, you are dancing on the Dark Side with Darth Vader (or perhaps Dorthy Vedic?).  Although I am not a mirror watcher, I fight the temptation of being pulled over to the Dark Side of tango, and it is not an easy fight. The Dark Side focuses on how things look rather than how things feel.  Beginners are drawn to tango because they don't know how it feels but how it looks cool.  I think it then it becomes a quest to dance the way it looks for others, which compliments the feelings they get.  This, my friends, is okay, but still the "Dark Side" in my opinion.

What I learned from Salsa 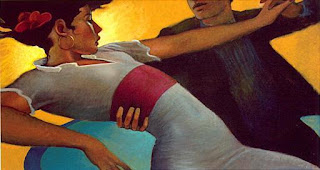 The basic rules for dancing in the tango community seem like a different universe when one goes out salsa dancing.  In salsa communities:

I love the music and the joy of salsa.  But one day tango took over.  For a long time I told others, "I am more of a salsero than a tanguero."  And then one day, my abilities and dance "vocabulary" took over.  The music and even my passion for dance exponentially grew.  I believe it was because of the improvisational nature of tango.  I am dancing to the bass or the violins.  Or perhaps there is a powerful pause and now we are dancing on the upbeat (2/4/6/8) rather than the usual downbeat.  Moreover, she may be dancing on the melody and I am with the rhythm section.  This is the greatest difference for me, explaining why tango is so satisfying compared to other dances.

Of course, milongueros will say, "and the embrace is missing in salsa!"  Yes, this is true to a great degree, but before tango I already was dancing with an embrace in bachata, merenge, salsa and especially rumba -- at least with a woman who trusted that it was only a dance.

Salsa was a good preparation for tango.  This is what I learned:

1. Don't hurt her.  Many women have hurts and pains from salsa or tango because of "man-handling."  Turns in salsa are dangerous and many women are hurt.  A light lead eventually had me dancing with many women who knew I would not hurt them.  In tango, the same principle applies.  Many women who dance a lot are pretty fragile -- not all over, but in certain places.  In tango volcadas are especially dangerous to her back.  She is dancing with exposed legs and feet while walking BACKWARDS.  It is a man's job to do a DAMN good job in protecting her obvious and not so obvious vulnerabilities.

2. Treat her like a lady.  Some men in salsa would pull a woman onto the dance floor, and then, at song's end dart off to find his next victim.  The beauty of the best Latin culture is to take her by the hand to the dance floor and then escort her off the dance floor.  I did NOT make this up.  This is salsa/tango protocol.  Anything less is not culturally savvy and not gentlemanly.  Ladies who do not expect this are training men to be culturally unaware of the milieu of Latin dance.

3. Dance only with her.  I learned what not to do from some less-cultured Latinos in El Paso.  Too many Latinos looked so childish because they were doing some cool move and then would look around to see who saw it.  Too often the hetero-Latino is looking for his next partner while dancing, and the gay Latino was watching the ceiling.  (This is just an observation of my Puerto Rican partner and friend who knew all the drama in the club.)  SO, dance with the woman in front of you!  And whatever you do, don't look at the ceiling!  (And ladies: stop looking at the mirror.  We know when you are doing it because you don't dance as well.)

4. Be mindful of her regular partner.  I learned from Luz, my Puerto Rican friend, that I should never ask a woman to dance without asking her male friend's "permission" in a Latin club.  That still bugs me because it feels like possession of a woman or as if she is a little child, but at its best it is also merely a sensitivity to a couple you may not know.  Many Latinas are offended if you do not ask him.  Just two weeks ago at a milonga, I asked a Latino if I might dance with his date, and he just looked away.  But the Latina Tanguera still got up and danced.  I am not sure what to say about this one.  I just went back to gringo culture that she was a mature woman, and could make her own decisions.

5. Don't take it personally if she rejects you.  You will avoid this in tango by never asking but waiting for her cabeceo (nod of the head).  Anyway, at a salsa dance I would ask many Latinas to dance and they would said "no."  There are a million reasons that they may not want to salsa (or tango) with you.  Let me give just a few:

6.  Dress up for all latin dances:  The UTEP (the University of Texas, El Paso), is called "the best-dressed campus in Texas."  That is because of the Latinos and Latinas.  Dressing nicely is something that is normal in Latin America and Europe.  I grew up in Reno, Nevada.  I wore cowboy boots to school from 7th-12th grade (not every day).  Jeans were my most usual attire. I bought my own horse at 15, raised chickens. I spoke only English.  That was then. Now I speak Salsa and Tango.  Dressing down is not Tango or Salsa, at least to me.  Many teachers from Argentina bring this up -- especially the older ones, but it falls on ears that don't speak tango.  I will just speak for myself here:  If all the ladies are dressed down, so am I .  However if the ladies are almost all dressing nicely, I feel weird about dancing with her if she took the time to look good but I did not.  I would feel insensitive to her not to dress at her level.

So salsa and other dances do have something to teach the tanguero.  And as a bonus, the improvisational nature of tango has made me a much better salsero because I dance to the music more.  From tango I have learned to lead stops in the many salsa tunes I know.  I now can turn her at the musically appropriate time as well.  Tango, however, is for me the epitome of dance improvisation for two.  And its culture, its special embrace is without peer.