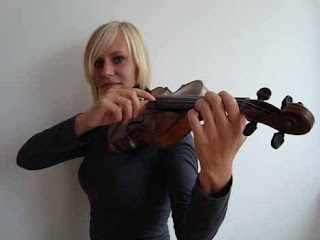 Pizzicato:
Pizzicato is the plucking of any stringed instrument (especially any stringed instrument that is usually played with a bow, such as the violin). This is probably the most important sound that tango aficionados start recognizing and understanding.  Sometimes the pizzicato part can be danced (see the example below), but it is often a sprinkling of glitter in the air.  So please watch carefully as Troilo's orchestra plays "Quejas de Bandoneón." You may click here to go directly to Troilo's solo and the start of the pizzicati (passage of pizzicato) in the background, but I highly suggest that you watch the whole video clip, especially before and during Troilo's moving solo.  Notice the violinists playing the pizzicati standing behind him.  Tangueras/Tangueos, please note:  One can dance the pizzicati!  I think I would dance the melody in this example.  Often dancers, even professionals, trudge along on the pulse in spite of the melody and the pizzicati.  However, if you have a playful partner with good reflexes and a good ear, try listening to the "queja" (complaint) rather than being the complainer.  The "listeners" are the violinists, playing the pizzicati saying, "¡No me digas!" as Troilo complains of lost love.  Then you and all of Troilo's friends can gather around him later in sympathy with the sweeping bowed passages after the solo.  An example of dancing the pizzicati follows, but watch this first!


I also highly suggest you view a wonderful demonstration of pizzicato at this link,which will allow you to better understand why pizzicati can almost sound as if a banjo is in the orchestra.

Now here is the best part for dancers:  How do you really dance the pizzicati (plucked passages)?  Listen carefully to the video clip for the pizzicati, but please notice that these dancers to not always dance every fast passage or pizzicati!  A beautiful melody often has the pizzicati sprinkling glitter in the background; so dance the melody or pulse!  Pay attention to the many pizzicati and one of the clearest passages at about the 70-second mark, which Horacio Godoy and Magdalena Gutierrez playfully dance with little-bitty steps.

The king of pizzicato in tango
Who in the orchestra is most often in pizzicato?  In tango the violinists are often playing pizzicato, but the bass is king of pizzicato, although the bassist uses the bow often.  But the bassist tends to be a mischievous band member (since the drummer usually has this role); so the bassist in tango is known for even using the wooden back of the bow for percussive effects.  Naughty!  Let's not leave out the one instrument in a tango orchestra that has more strings than anyone else (230 strings on the average piano).   Rarely does one see the pianists plucking their instruments, and they tend not to be mischievous like bassists!   However, some pianists (especially when drunk) are known to get up and pluck their instrument.  See the pizzicati (pizzicato passage) by the Piano Guys below for a good example of how even the piano can be played pizzicato.

Note that the above piano is being played in three major musical categories:  A keyboard instrument, a percussion instrument (struck with hands and hammers) and a bowed string instrument.

No, don't order a pizza... pluck your strings!
Here is an example of 4 musicians playing tango with bows (arco) and pizzacatto (pizz).  The cello is the bottom line and is already playing pizzicato, others are starting or stopping the pizzicati.  The top two lines are violins and the second line from the bottom is the viola.

Obscure but interesting information you'll need before going to a Baroque cocktail party: Plucking can be done artificially. Technically speaking, the harpsichord is a "plucked" instrument because the strings are plucked by a quill after the harpsichordist strikes the key. The piano is considered a percussion instrument because the hammers hit the string. Of course, both are played exactly the same through a keyboard. While doing the same thing (playing the keyboard), the keyboardist can be a "plucker" or a "percussionist." But I wouldn't make these accusations to a harpsichordist in public. :-)


Photo credit of woman plucking her A string:  http://violinfromscratch.com/learn-violin/holding-the-violin-and-playing-pizzicato

After I posted the above blog, I found a better quality video clip of Troilo that I will add if time allows:  http://youtu.be/y32Gn-Z4DFk
Posted by Tango Therapist at Sunday, April 28, 2013 5 comments:

"This is NOT tango!"

I discovered tango while working at a medical center in the United States. One day at work I met a colleague, a psychiatrist from Argentina.  I enthusiastically wanted to show her a tango video, which I thought was pretty darn cool at that time.

But after I showed her the
video clip, she said in Spanish:

"This is NOT tango!"

I looked at her in disbelief.  She looked at the computer screen in horror.

I did not understand her statement for about a year.  You see, I only knew about tango from the perspective of it being an awesome way of dancing and doing cool moves. I can never know what she saw in that video, but I think she was culturally nauseated, like a French connoisseur of art observing a group of American art students making poor renditions of Vincent van Gogh's art, while speaking English in a French accent and drinking blueberry wine with a straw -- all the while proclaiming to be protagonists of post-impressionist painting.  That's what I mean by "culturally nauseated."

Eventually, I knew the essence of tango was that is an artful expression, framed in a social context. Great art requires a great frame.  The art itself is the expression of what I call the essential Three M's of tango:

(1) A common unity of inspiration by listening to the genre of music that has inspired this art form and way of moving.


I am at times inspired by performances, but often I cringe at the applause for the move most removed from tango (acrobatics and ballet, for example).  Perhaps my Argentine work colleague also saw the grace of the video I showed her long ago, but I think the horrific effect that the video above has on me is what she saw.  More and more, even the most graceful pseudo-tango acrobatics create this feeling of nausea as the above video clip does because the graceful dancers are inspiring anti-social tango on the social dance floor.  The graceful ones are gracefully bad examples for dancers who dance socially.  I believe they unwittingly motivate people to see tango as a competition or sport.  Tango is not a race, a time trial, a performance.  It is the three Ms, framed in a social context.

An earlier version of this post had a video clip that was pointed out by a friend as being a couple that were not professional and in a contest for people at their level.  A tango teacher narrated in the background, which I did not understand was rather cruel.  I was under the impression, falsely, that the man himself was narrating.

Also it is fair to say that many performers are doing great things for tango to keep it alive with fresh ideas.  Tango, like a language, will change with vocabulary and syntax and rhetoric.  Perhaps the most valuable contribution of performers, is that it makes it possible for talented teachers to make a living at helping people to be more graceful in their tango expression, and they link tango with gracefulness and aesthetic expression.