If not for me, then for them 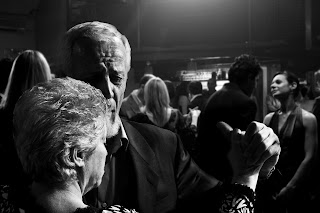 I just watch at the milonga -- hardly dance anymore.
My cigarettes slowly bring me to my end.
Her absence is a cold replay of a closing door.
Oh, how I wish I could reach out and send
One last message from earth to her above.
How I would give anything to hold her and dance --
Anything to have grown old with my Love.
Too late? Love can have another chance.

If not for me, then for them.

A tanguero's notes on the film:

When I discovered this film, I thought it was fairly new, but it appeared in 2010.  I was so moved, that I immediately wrote the poem, "If not for me, then for them."  I later received a message from Marco Calvise regarding my comment on "Milonga" from his YouTube Channel, saying that he was pleased that I had noticed little details, including that the woman was pregnant.

These are some of symbols which were I immediately saw:

The cast:
o The non-dancer Observer:  He is smoking himself into oblivion, a slow sort of suicide.  He is cheap with his first tip, but is extravagant -- 50 euros ($70) to help to give the couple a chance to reunite.

o The married woman:  She is not only married, she is pregnant.  Twice her husband holds her stomach in a non-sexual way.

o The older man and woman:  It is not clear if they are a couple or not, but I think they symbolized to the Observer the growing-old-in-love that he did not have.

o The Tango Tomcat (flirt):  Great dancer, with whom the married woman first dances, attempts to kiss a woman and she resists.  The Observer sees this, and pays to get him out of the picture.  Also, notice the too close for comfort looks he gives the married woman.  I rarely see this at a milonga and find it creepy when I see it.

The props:
o The cigarettes are not only a way to slowly kill yourself, but here the one that he allows to burn without being smoked represents a life that suddenly seems over.  It burns the Observer's fingers because of his lack of attention.  Pain wakes him up to the pain of the moment:  The realization that life is running out (abgelaufen) without his own psychological insight and observation.

o The pocket watch:  Notice the loud ticking?  Mortality:  his own.  The woman pictured inside the watch is dead.  Ashes fall on mortality?  --  that's death.

o The Dead Lover:  The woman in the watch resembles the married woman.  Now, that makes us realize that the Observer was not looking her up and down sexually in the way we first thought.  She reminds him of his own losses and he wants to give the couple a chance (thus the name of my poem:  "If not for me, then for them").

Sounds/gestures:
o Clearly fluent Italian.  A friend told me that some critics of the film said it was not realistic for Buenos Aires.  Both the language and the gestures are fluent Italian.  Why would anyone think that this milonga is supposed to be in Buenos Aires?  Milongas happen every night of the week in Italy.  Chiaro?

o Pauses are times to think and are not realistic for a milonga.  For those who like realism, go to a real milonga.  This is a film with a message to make in 13-minutes.  What appears to be a second tanda is only a pause -- the longest pause.  A cortina would have distracted the Observer's need to think.  The last dancers on whom the Observer fixes his gaze is the old couple -- a melancholic moment and a hope -- his loss and his hope for the couple's gain.

If I had three hands, I would give three thumbs on this short film.

P.S.  3 January, 2013
As a reassurance that I wasn't reading too much into his film, Marco Calvise (pronounced kahl VEE zay) shared my poem and analysis on his own Facebook page.  Also he said "the best description of my work" on my Facebook link to this post, so I hope that means that I mostly picked up his intentions in the film.  Indeed, I may have read too much into things, but I think it more probable that I have missed a lot.  Comments are welcome if you see even more.


Photo credit:  One of many backstage photos the director sent to me at my request.
Posted by Tango Therapist at Saturday, December 29, 2012