It was an upgrade to go from Frankfurt am Main, Germany to Buenos Aires and then home to Washington D.C.  At first I felt it would be absurd to go so far out of my way. One evening in Buenos Aires? Seemed too far to go for just one evening. But I bought the upgrade anyway.  It was a good price.  The man looked over his glasses as if I were mad to be paying for the ticket.  He wouldn't understand.   He had never experienced tango.  He gave me my change, and I said "danke schön." He looked again and shook his head in disbelief. 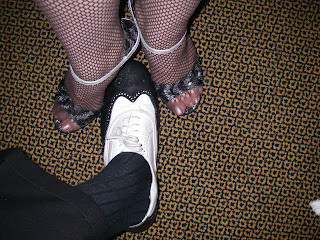 Buenos Aires was hot. I went from a cold winter to summer in a snap.  It was a shock but not as much as the shock from culture.  Buenos Aires was busier than cities in the US at night.  People were out.  The faces were different, the clothes more formal.  The dialect of Spanish had my brain working to squeeze out some understanding of the syllables that bounced around in my cerebral word-recognition engine.  I longed to quickly find a milonga, where I could communicate it the language of a walking embrace, a moving expression of the music both my partner and I loved.

During the short transport, I was given a booklet "Milonga Etiquette" to read and sign.

The night went by quickly and with absolute delight.  Each of the things I had signed ended up being very important.  The ambiance remains strongly in my mind:  The smiling faces, the women who melted into my arms and made me glad that I was a man, the closeness of the dancers all keeping their own little space, the new movements I had discovered with the guidance of the music and my partners unique way of moving.  Precious moments in Buenos Aires.  It was very much worth the the upgrade from Germany.
When I awoke this morning in Washington D.C., I wished my dream had never ended.  Maybe another "upgrade" tonight?  Will you join me?  I will help you fill out the paperwork.
I am accustomed to going to Buenos Aires for a night.  That is what a milonga is.
Posted by Tango Therapist at Sunday, January 09, 2011