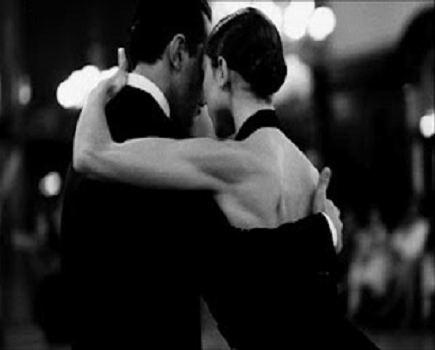 Tango culture at its center and at its best is a community of harmonizing elements:

The whole dance floor is synchronized in movements to symphonic* (harmonized) sounds of musical notes. And tandem dancers,  synsomatic in their dance, are perhaps some of the best examples on earth of "two becoming one" in a spontaneous way.

Synsomatic
In order to find this epicenter of tango, I try to be more fully present in my own body, my feeling, my breathing.  Only then can I evolve into the dancing animal with four harmonizing legs, four lungs, and four cerebral lobes; four eyes--two eyes open, two eyes closed, and two hearts drumming together the most primal of all symphonic rhythms.
I think we would all dance better tango if we would find our own center first, embrace ourselves and be kind to ourselves more.  How can four legs learn to harmonize if two cannot first?


And what does this amazing, evolved four legged animal do with its harmonizing legs?  Can this animal now compete to be the strongest, the fastest,  or climb the steepest mountain?  No.

Social tango is a herd of four-legged animals, strong in unity.  The herd "races" to get lost in the middle of a song.  And the herd shares a united lament upon crossing the finish line with the feeling the race came to and end "all too soon."  And winning?  Winning is when we all smile together at the end.

Please do not read this superfluous note unless you are interested in languages:
"Syn-" (at times changed to "sym-" or "sys-" is a Greek prefix, meaning with or together.  In Greek, and now in English, Greek roots of words, like, "chronos" is "time";  phonos" is "sound," and "soma" is body.  Many Greek words came to English through Latin via Old French, and now are fully accepted into the English language, except "synsomatic," which I have coined here to describe the tango experience. St. Paul used the word "syssôma" (synsoma) to talk about "one body" of very distinct elements of the Early Church: Jews and Gentiles uniting as one in Christ.  The funny thing is that scholars say that Paul was coining the word himself.  Paul would understand.

Sources:  Acts of the Apostles.
Posted by Tango Therapist at Sunday, November 16, 2014