Describing the world of Tai Chi and Qigong in the martial arts,  Garri Garripoli says in his book:

The "master. . . moves as if entranced in a tango with the Universe."*

And the converse is true, paired tango dancers move as if connected to the soul of the one before them and the universe.

I have a theory:  Tango is best not an analogy to describe martial arts, as Garripoli and others have done.  Tango is at its best a better expression of yin and yang than the martial arts!  The dancers harmonize and connect their energy-centers and melt together as one.  The martial arts do this, but less.

Tango's chi (energy) comes from its tandem harmonious movement: Two souls connecting because of music that resonates between them.  Then these two connect to those around them, and then begin connecting to ever-broadening circles of awareness unto the ends of the universe.

Of course, the martial arts can be excellent expressions of being in the now.  Yoga has its roots in the martial arts, but is excellent at connections.  I am convinced that many do not pay attention to bio-energy fields and are less aware of them with a gaping-wide embrace.  Bio-energy fields is a term invented to avoid "old fashion" terms, like chi.  I am aware of the interest and research about chi because I have worked as a therapist with combat vets for many years.  Western medicine has often caused drug dependence and suicide because of it failure to treat these soldiers.  The "bio-energy fields" phenomenon is the preferred name in empirical research to explain why wounded combat soldiers in physical or psychological pain get better with yoga, Tai Chi, Qigong and Reiki practise).

Try to be aware of your partner's bio-energy field.  If I am dancing with a woman who is focused on what she has learned, how she can adorn here and there, who in the room is watching her--she will hate they way most men dance sooner or later and maybe especially me.  And so it is with men, who pay attention to the superficial things of tango or even the mechanics of 24 basic movements of Tai Chi.

I have heard some tanguera teachers say said that the the men who please them the most while dancing are their students.  I am very skeptical about this.  It seems that I have also heard the parallel  statement from tangueros who say that most of the women who please them are those who do exactly what they lead. Chi is the unexpected, the subtile-to-powerful energy field that creates the true connection.  Yin 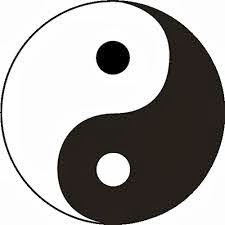 doesn't need to teach Yang how to move and be, nor does Yang need to "lead" or over-power her. True, these energies of Yin and Yang have their own roles, but the music and the universe lead, and we follow, Yang doesn't lead. Really.  Movement perfection, the melting together embrace, balance, musicality are outward manifestations of tandem dance, connected as two energy fields that become one.  The Tai Chi symbol that most call "yin and yang," symbolizes tango better than any martial art.

A few anecdotes:
I danced with a women in Mannheim (Germany) two weeks ago, and asked her a question I have never asked before:

Do you practise Tai Chi?"

"I could feel your chi," I replied.

"Well, I will tell my Tai Chi instructor!  He'll like that!" she said excitedly.

I have felt these bio-fields before.  Especially with a Korean woman in D.C.  She was at a festival, and I never saw her again.  She said, "I had no idea what it would feel like to dance with you by just watching."  That's what I was thinking too.   It felt like her chi danced me, and this sort of thing keeps happening!  In Frankfurt am Main it was an advanced yoga teacher who impressed me with chi.  I found out much later that she was a yoga teacher.  Time stops or centuries past when we dance.  In Kaiserslautern the same was true with a woman starting her praxis of Tai Chi many years ago.  In Austin, one of my favorite tango partners, I also found out later, was a Tai Chi / Qigong instructor. But this energy is all around if you.  It dances you rather you dancing with it.  Then there's the electrifying energy of a my partner.  That's why we are partners: Chi.

At the highest levels of Tai Chi, one's "opponent" is in reality one's dance partner.**  In tango, we don't have to wait that long.  You can do it from the start--and without calling your partner an opponent!

Let the Chi be with you.

*Quoted from Qigong: Essence of the Healing Dance
** See The Tai Chi Two-person Dance: Tai Chi with a Partner By Jonathan Russell