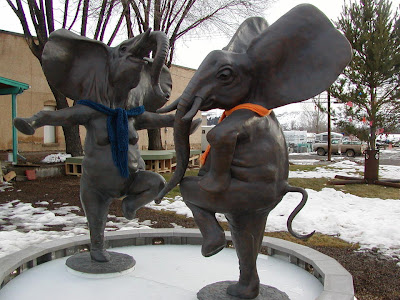 True tangueros are not male elephants.  Well, most are not.

I am not talking about size or smell or the amount they eat at the snack table.

Male elephants are loners.  The bulls go about life just finding the next "dance" and fighting other bulls.  True tangueros, I believe, are not bulls.  Female elephants like bulls; tangueras do not -- at least the tangueras I know.  So let's cut the bull.

Recently, a tanguera friend told me of a problem in a small community I've never visited had a "bull" fighting over territory.  I will give him an alias name to protect the innocent:  Bull E. (the older, experienced dancer) was hassling a the less experienced dancer.  Evidently Bull E. felt the younger tanguero was using too much space on the dance floor and told him so.  Ironically, Bull E. is notoriously all over the floor, zooming between lanes and then ends up in the middle doing super-cool-look-at-me stage moves.  Now if the younger dancer joined the bull at his own level, what would we have?  Two "bulls" having a fight to the death.  You know the center of the floor is really not used very much; so why not have it out there?  Make it quick, of course, during a cortina.  Or maybe not -- on second thought.

Here is my suggestion for "cutting the bull out of your community," if fighting to the death is contrary to local laws and codes of ethics:  Especially small communities need a TOGA party (TOGA = Tangueros Only Group & Association).

I imagine a TOGA party could be a sub-party at every milonga, but I think that an informal men's group could be very helpful.  Women have been great at defining their role in modern society, but I feel that we men are way behind on defining what it means to be a man in the modern world (now that we fully acknowledge that women have brains).  The tango community is a great place to learn what it is to be a man with a brain in a world with women who also have brains. I am not being sarcastic here, really.  In some ways, tango simplifies male energy and female energy much better than in modern life.  Female energy -- if you have read any of my earlier blogs -- is not subservient or submissive but essential for male energy to co-create and truly dance.  Male energy is ... well, what is it? That is what TOGA party would be for.  I mostly know what male energy is by what it is not:   Male energy is NOT fully to blame (as some teachers say) if things are not working.  Male energy is not just talking to a submissive energy that is doing all the listening.  It is not JUST pushing, pulling/pulling/indicating (marcando), dragging (arrastrando).  My best guess is that the male energy is part of a magical mix of yin/yang, male/female, thesis/synthesis or the musical note/musical pause that creates something far too complex and magical to name in human language.  We men could be far better about figuring out what it truly means to be a man in the modern world and that includes in the modern world of tango, which is full of very talented tangueras.

Mark's TOGA Party Online
In a sense this blog is my TOGA Party with many other men.  Today, a tanguero wrote me from across the world to say that he discovered my blog a few months ago, and he has read nearly every entry since 2009 on my blog.  He and I are not elephants, loners fighting over territory and tangueras, but finding connection as two men trying to figure out the magic of tango and how it affects our lives.  He sent me an email to cheer me on.  Welcome to the Online TOGA Party, Tanguero!

What do you say, Tangueros?  Shouldn't our Tangueros Only Group & Association should have a vision statement and tenets?   Here's a rough draft (I'd like your ideas too):

Tenets for Social Animal Citizenship as a TOGA member:
A note to the ladies:
TOGA is for men but it is truly all about those whom we adore -- you!  Tangueros are not exclusively men either, but those who dance in this role.  Many readers of this blog are women.  I am not excluding you.  Women lead the way in most tango communities with their own Tangueras Only Groups (TOGs).  These groups bind together the tango community, enhancing the cohesiveness of the community by developing solidarity at several levels.  Ladies believe me, you don't need a bull in the milonga china shop, and the TOGA Party may be the best way to cut out the bull entirely.  I am not BS'ing you.  :-)
Photo Credit:  Joanne Tullis http://www.city-data.com/picfilesc/picc44622.php
Posted by Tango Therapist at Friday, March 18, 2011

Email ThisBlogThis!Share to TwitterShare to FacebookShare to Pinterest
Labels: On being a man, Tango Etiquette