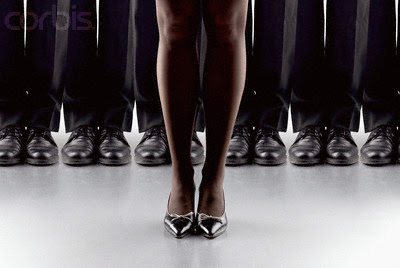 Evolving away from the Tarzan-Effect

But how do women lead?


They lead the way to new dance ideas.  Sometimes by just pausing and allowing four possibilities rather than the one they learned.  A tanguera is like a guide, leading me by giving me possibilities I never had considered.  She opens the gate, and says, "Hey, Mark, here are four paths.  Most men go down this path, but here are three other paths."  Now, I decide to take path number three.  Later, I tell her that I have never done that before, and add:  "You inspired me."  She says "thanks," and adds, "You are a great lead."  What?  Who was leading whom?  If nothing else, we were co-discoverers on this journey that neither of us had ever made.  But it was her LEAD that allowed me to take the road less traveled.


The problem here is the word "lead."  Some leaders push or pull others along.  Perhaps that was the man's role when tango began.  The concept of leadership has evolved, yes, but in many ways nothing is really new.  History is replete with leaders that did not push or pull.


The Santa Mónica International Tango Holiday (SMITH) gave me further insight into tango not as a "men-talk-women-listen dance" but a "men-speak-with-an-accent" dance.  In other words, I only speak without an accent when I dance alone.  I speak through a woman, and she can make my thoughts sound eloquent or dull; French or Spanish.  But I must be careful to say here that she is not my interpreter, she is like an interpreter, but much more.  She LED me to say it, I said it, and then she put her own accent on it.  Of course, this may be what she is experiencing too; so the analogies only come close to describe what I think is going on.  Whatever the case, I firmly believe that tango is more sophisticated than the Tarzan-Effect: "Me talk; you listen."


Perhaps all my thoughts on women and leading in one sentence should be:  "He leads; she follows" because the phrase "women do lead" can be misunderstood too.  I don't want to create a monster.  I have danced with advanced dancers  who pull me into the next step she is thinking I will do.  I didn't say that, and the music didn't say it either.  Leading in this way is not allowing me to speak in her dialect; she has put words in my mouth and reiterated what a teacher taught without regard to the moment and the music.

Tango can be a soliloquy or monologue for two.  However, for those who have experienced a tango conversation, "women do lead" will make a lot of sense.  My hope is that men start recognizing the women who inspire them to do something that is not in their cookie-cutter vocabulary that they have learned, but something that was truly the making of great poetry of two people speaking a unique language that no other couple in the world can speak.  That, mis compañeros de tango, is the beauty of tango.


Trailer on next article for women-inspired tango:
In the next article, I will attempt to reconstruct some of the steps that women and the music have inspired while dancing.  Their dialect and these moments still influence the way I now "talk."  Here is an index of inspirations that I will mention just some my most wonderful tangueras:

Hot off the press just from last night’s práctica in Austin:
¡Hasta la próxima!  Or as we say in Tejas: "See ya in a bit"!
Posted by Tango Therapist at Monday, May 24, 2010

Email ThisBlogThis!Share to TwitterShare to FacebookShare to Pinterest
Labels: On being a man, On being a woman