Dancing Alone with a Warm Embrace 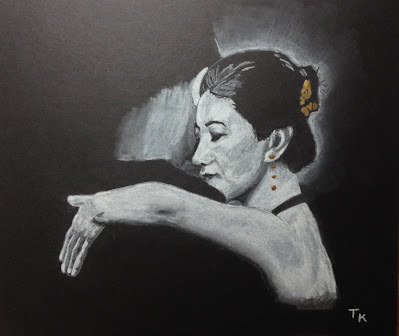 Tango is just a dance, you know. It allows us to be in our bodies.  It makes time stop or race. It makes regular people feel as if the music has them doing things better than anything else they have ever done in life.  It's an excuse to hug people and be transported to oxytocin heaven without even knowing each other's names.  It transfers warmth to everything we do in life.  But it's just a dance.

The pandemic is likely going to bring Jerry to psychological ruin.  Tango had pulled him out of a deep depression in 2008.  He didn't even know he was depressed, or at least how depressed he was.  He found refuge in dancing salsa, and that was fun.  Depression's best medication is fun, but tango was not a psychotropic medication--it was therapy and medication.

"I told myself that I would never be so vulnerable," Jerry tells himself as the first milongas began being canceled.  Being cut off from dancing is as scary for him as was getting a divorce.  He is afraid that he has let himself fall in love again. He thought he was safe because a dance should not be able to abandon him as a woman could.  "This is only a dance!" he tells himself over and over like a mantra.

He knows this is a bad omen when he starts catastrophizing with slogan-like phrases:

"A close embrace will never be the same."
"Everyone will be afraid of microbes and viruses."
"Even if things get back to normal, I will be all rusty and lose the flow."

"I'll be lonelier than ever before."

He looks at himself in the mirror and tells himself to slow the onslaught of negative thoughts.  "It will only take over my mind and make me spiral down into despair," his internal psychologist tells him.
Tango is just a dance, but his fear of being depressed--not the lack of dancing--is what he truly dreads. Another episode of his blood flowing slowly in his veins looms. Depression knocks at the door.

But that's not going to happen. Tango did not leave him; his wife did.

Now he has skills he never had before.  He just doesn't really know it yet.  Like many others in the tango community, life indeed goes on during a pandemic or if a dance partner dies or if a foot gets broken.  Jerry, like others, starts connecting to family and friends on video chats and messages and texts. They read books. And tango dances with them through life, but just in a different way.

His mother is the most amazing connection during the pandemic and this dearth of social touch. Going to his therapist, David, helped him most reconnect to his mother.  "I don't want to get on medications again," Jerry warns his on-and-off therapist. "But I am dreaming a lot. Some are okay dreams but they are very vivid.  I keep dreaming about my mother, who died in 2018, along with my grandparents the same year."

It is good to reconnect with David, who is his old self, even on a normal video chat, which now Federal law allows patients to use during the pandemic.  David peers over his glasses and stares at Jerry.  He's silent for longer than usual--as if he is stumped by this dream problem.  "Well, well ..." he finally says haltingly.  "I know you are an atheist, but you are presenting me with a spiritual issue."

"If you're haunted by your dead mother.  She is a spirit, and therefore, is this not a spiritual issue?"

"Okay, then. Do you want to talk about something besides ghosts, then?"

"Actually, I want to talk about my fear of another bout of depression now that I cannot go dance. But these dreams are bugging me the most."

"Okay, then tell me what you dream about."'

"I dream over and over about her casket going into the ground, and I have no feelings. I cannot cry. My ex-wife and my Mom kept in touch after our divorce.  I was kind of jealous.  Then, just as it truly happened, Nicole comes to the funeral, staying on the out edge of the funeral party. Then and now, these scenes are like a close-up zoom lens. I can only see Nicole there crying as I am numb and cannot cry. I feel jealous that she can cry and I can't.  At the same time,  the audio is turned up, and I hear the casket being lowered into the ground.  People in the funeral party take a shovel full of dirt and throw on the casket.  They wait for me to do it too, but I am paralyzed."

"So who is the producer of this film in your head?" David asks Jerry.

"Right.  And who is the director?"

Again David is silent and looking over the top edge of his glasses.  "You are watching a B movie that no one wants to watch; not even you.  And that is because there is no director.  Jerry, what do you want me to say?  Should I be like a psychoanalyst and find the archetypes and deep meanings of your cast of characters?  Should I be a shaman and help you speak with the dead?   Or would you prefer that I help you be a better film director to change this shitty movie into something worth watching? It's your choice."

"Okay, help me with that.  That is better than having a spiritual problem."

"That is your spiritual problem that you have not spoken to your mother except in B movie films at night.  And even then you are the emotionally paralyzed child who has no voice.  How would you make this a better film?  A film that you would want to watch or want to show to some intimate friend.  Would you wait for your dream life to come up with better storylines or would you sit down during the day and create a better film?"

David and Jerry go on about his worries about the pandemic, how his anxieties are returning, and how depression is his greatest fear.  But all of that is a blur.  The thing about showing up as a director, that is all he can really remember about their video call.  Now the empty director's chair haunts him rather than his mother.

Jerry sits at his desk and pulls out some things he still has from his mother:  A cross that she had from her mother.  A ring.  And some papers that he has forgotten, including a completed a genogram from an undergraduate sociology course.  He recalls his mother. She tells him about the family as far back as she knows. He charts dutifully as he had learned in class--that square boxes are for men and circles are for women.  Then came the amazing stories from his mother.  Her first husband's father had raped her.  She has told no one until they sit there together, filling out the genogram. Also, she admits that she had given away her first child to adoption. On a lighter note, she recounts how Jerry's sister is such a natural ballet dancer; how his half-brother is a musician; and his brother is a natural artist and sculptor. She recounts how Jerry was playing guitar even as a toddler.  Jerry connects the dots. He is the musician/dancer in a family of artists.

Jerry stops to think. "Here is a movie worth watching right under my nose."  Well, at least he realizes he has something better than the B movie he has been watching in his dreams.

Memories pour in.  Mom teaching the kids to cook, taking them to church, and the words on the wall in light blue, painted with a 3-D effect:  "God is Love."

"Fuck off.  Fire me and get another Director."

***
"Mom, I want to tell you how it felt when I visited you. I could finally really hug you.  I have to admit something.  I learned that from tango.  I learned to hug people.  I had forgotten how.  I knew how to do it as a kid.  I relearned with my first girlfriend, but after my divorce, I had forgotten. I was even afraid.  But I had long stopped hugging you since my teen years.  I wish I could've hugged you more. From tango, I learned to dance with the young and the old.  I hug the young women, the daughters I never had. Yes, I hug the sexy ladies who miraculously allow me to dance with me because of my musicality. I hug friends who giggled with my playfulness. I hug the older ladies like they were my aunts or even you. So when I visited you, it was easy to hug you again. Do you remember the time we went back to church, and I kissed my old Sunday school teacher on both cheeks as if she were a venerable tango teacher visiting from Argentina? I could see it in her eyes. You both were as surprised as you were delighted.  But I just had learned how to do this because of tango.  It was a reflex. It was etiquette. It is the new me."

"And Mom?" Jerry went on, then pausing.  "I want to keep hugging you.  Holding you long.  This feels right.  David tells me that I can have a growing relationship with you. And I know how I can do this.  When I dance by myself, please come with me.  I have danced with others who were hurt like you were in your divorce and sexual assault.  They found healing.  And I too will find healing dancing with you.  I am glad Nicole came to say good-bye to you.  It was her right and yours too.  It was your right to have all the people who love you to come to your funeral.  And she had the right to say goodbye.  Maybe death talked to her and told her that we are all connected and the times we loved were the only moments we were truly alive. I am grateful for those moments. Anyway, it was your funeral, sorry that I have been so fucking selfish. . . "

"Don't say that word, okay Jerry?" a motherly voice says in his head.

Jerry knows that he has reconnected with his mom at that moment.  That voice.  It isn't what his mother would say; it is what she is saying.  "David was right," he admits to himself. "I have had a spiritual problem."

The pandemic will give him plenty of time to get back to dancing by "himself."  He can work on knowing the music better, knowing Laurenz and Tanturi and some other lesser-known orchestras better.  But mostly, he is sure that he can find a deeper sense of himself and a healed past--or better said a "revised past, a different storyline."

***
In a video group room with tango friends three days later, he hears someone in the group say, "Tango is only a dance, you know."

"Not in my Movie," he whispers under his breath.  The voices in the chat group dim as he reflects: "It is who I am. The musician/dancer who learned his warm embrace from his mother."

The Science of the Embrace 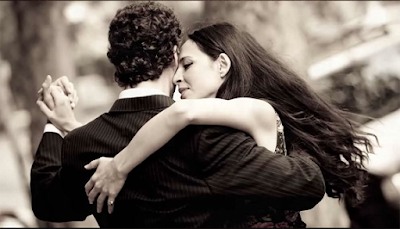