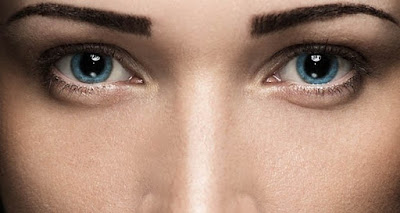 She peered into my eyes and looked concerned after we danced for just two songs of a tanda. I had been dancing at a small weekend tango event, and I suppose I was in a euphoric trance.

"Your eyes are really dilated.  Are mine?"

As a registered nurse she mentioned a few concerns, but ended by saying, "If you are feeling fine, then you are okay, but wow, they are really dilated."

As she and I continued dancing, I considered some possible allergic or neurological event that might be going on. But I felt fine. Really fine. In fact, had never experienced this level of euphoria while dancing--ever.  Earlier in this blog, I had written about the Parasympathetic Nervous System and tango.  Was my response to this wonderful experience causing Dilated Tango Eyes as I first thought?  Upon reflection later, this could not have been the cause.

The Autonomic Nervous System has two main branches, and the parasympathetic part kicks in when we feel safe, calm and happy. Dilation of pupils constricts when we feel safe. That is why my eyes should have not been dilated.  Though the phenomenon of pupil dilation is well studied, many questions are unanswered. Add this paradox of Dilated Tango Eyes (DTE's) to that list!  From what we know in medical science, what I report here is a strange anomaly. One would think that because I was calm I would have had normal pupils or  even slightly constricted pupils.  Fear, arousal, and an over-tasked brain dilate the pupils (via the Sympathetic Nervous System).

I have a hypothesis to DTE's

Meditative dance--being attentive to breathing, heart, the music, one's partner and the community of dancers--creates a paradoxical calm attentiveness, even spiritual arousal (for a lack of any other term I can think of). The easy explanation above does not account for others in the room the other night who were having as much fun as I was, having as many dances on this gender-balanced weekend, having as many social connections and hugs.  As my last few posts have reported, I am consciously practicing mindfulness dance, which I wrote in the The Fourth M of tango.  I started consciously started practicing mindfulness more than seven years ago (see "If Einstein could dance tango"). Although high levels of happy hormones could be a factor (see P.S. below), my question remains:
Does mindful meditation or specifically cultivated mindful dancing dilate the eyes? I think it does. (No, it's a tango high? Please see the post script at the bottom of this post).

So I looked to the scientific research on this hypothesis that mindfulness might dilate the eyes.* What I found is that those who practice meditation have more pupil dilation to positive emotions and less dilation with negative emotions when compared to the "non-meditators." The graph (shown below, right) shows the comparisons between the two groups.

I believe that tango dancing is by nature a meditative dance, but so is yoga, tai chi, and even meditation in stillness, but sometimes these activities do not change the brain or ANS in any way that indicates true deep consecration and calm (see brain scans of experienced meditators/novice meditators below).  I also believe that not developing what these activities are by nature, leaves tango, yoga, tai chi, etc. in the category of "fun" or "a hobby" and not a true mindfulness practice.

I hope you will help me with your own observations of DTE's while dancing.  You can email me or comment on the links given below. Is it possible that mindfulness in tango takes a person to a kind of spiritual arousal, attentiveness and high levels of concentration even while relaxed?

Even if I was just high on happy hormones, isn't it nice that our body's nervous system treats us to the natural high with a cascade of internal hormonal changes?

If we listen to our body, it is telling us:

You have to know the address and knock if you want to enter.

*Research on Mindfulness:
1. The graphic above shows the best research on dilation of the pupils and mindfulness. Although the title of the article focused on the difference of pupil reaction of emotionally negative stimuli, the amazing thing to me is that non-meditators were remarkably less attentive to positive emotional stimuli.  See Pupillary Response to Negative Emotional Stimuli Is Differentially Affected in Meditation Practitioners.

2. Less specific to dilation of eyes, the graph below comes from research of mindfulness concentration and graph shows what the brain is doing so much differently between experienced and novice practitioners of mindfulness--also facinating. 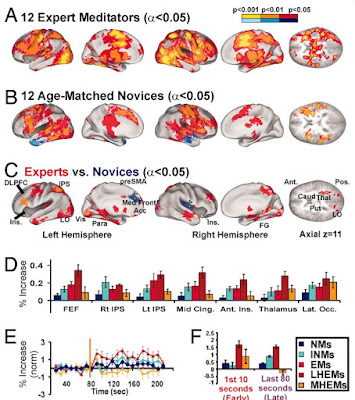 Post Script on 'addictive tango':  For those who believe I might have been high on tango, le't address that as an aside:  I am open to the dilation of pupils from a high attenuation of happy hormones from tango. The natural happy-dance endorphins, named after the god of sleep, possibly could have dilated my eyes.  Or dance dopamine. Or the "hug hormone" of oxycontin.  I doubt it because at the natural bodily dosage of these hormones they activate the Parasympathetic Nervous System which constricts the pupils.  But it is possible. These hormones are responsible for social interaction, relationship/community building, and in the case of oxytocin, a way to bond with others, as what happens with babies with parents or lovers. The more appropriate your method of getting these hormones released, the more satisfying they are. (Hint: using addictive drugs is an inappropriate method.) That is why researchers' examination of tango and other dances have been proven not to be addictive because by in large, people who dance tango build relationships and bonds with others beyond the dance floor which are satisfying and lasting. I realize that armchair psychologists make everything pleasant an addiction, but this is no more scientific than blaming the devil on your desire to dance more than you should. In other words, don't diagnose without a license. (More reading on the myth of tango addiction is here.)