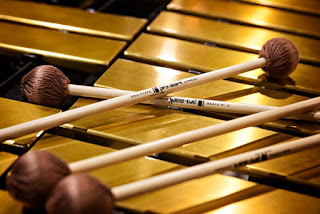 Knowing which instruments are playing will not make you a better dancer.  However, instrument recognition will make you a better listener.  Listen with you body.  That is more important, but listening with your mind added to that adds to the fun.  Recognizing the bandonion, violins, bass and piano may be easy; so here's another nice instrument to notice:  The vibraphone.

The vibraphone is a modern instrument, relatively speaking, created less than 100 years ago.  The vibraphone's ancient relative is the xylophone.   There are tangos written for orchestras with vibraphones during the Golden Age of tango, and once you attune your ears to this wonderful instrument, you will better appreciate what you are hearing.  The vibraphone will help you identify the few orchestras which use it too.
﻿﻿
What is the vibraphone?  The "vibes" use an electric motor under it's metal bars to create the vibrato by blocking for a moment the sound tubes that help give it resonance.  As the motor runs the sound tubes are physically opened and closed. Many jazz musicians turn off the motor, and just leave the tubes fully open.  In the Golden Era of tango, jazz was also played at the milongas, so it is no wonder that this instrument made famous in jazz would be introduced to tango.

Just so you can see the instrument and hear it better, here is not only a clear view of the instrument. Gary Burton is the probably the greatest living vibraphonist.


Now, let me introduce you to the orchestra leader and composer who brilliantly used the vibraphone in tango during the Golden Era: Osvaldo Fresedo. His vibraphonist is standing to the left of the bassist in this photo.  You will hear the vibraphone used by many tango orchestras after the great Golden Era of tango, but he was the one director who used the instrument well during the great dance era of tango.

The problem with the following older film (below) is that is paired with an newer recording.  This live show on film is missing many of the elements in the newer recorded version that overdubs this older film.  The this live show, the vibraphonist is standing in the back on the far left playing maracas, which is not in the recording. Watching the film is a distraction from the music recorded later, yet interesting.


Now, this next example has no distractions with just audio. Try to find the vibraphone with your ears in the first song of this compilation.  Especially if you can hear the vibrato, then clearly it is the vibraphone and not the piano!


Recognizing the vibraphone will give you a clue that it is probably Osvaldo's Orchestra playing at your local milonga.  Orquesta Típica Victor will use the vibes, such as in "Temo." Here is an example of the OTV studio musicians adding the vibes as only a nice effect at the end of vocalist phrases.

Have fun listening with your body (dancing)!

Photo credit of vibraphone at top.
Photo of Fresedo's Orchestra