When Eros and Agape Met 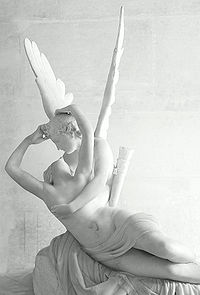 While on vacation in Argentina some years ago, Eros and Agape happened to meet at a café. They had met before in Athens and got into a big argument.  Since that time, they had refused to talk to each other. But this time they were both on vacation, and were more relaxed.

Agape was the first to speak because she felt that it was her place to put aside old hurts, and she figured Eros would never take the lead on normalizing their relationship. She was right. Eros had a certain inflexibility to him.

"Eros!" she said, "funny meeting you here in Argentina!"

"Hi, Agape," he said, noting how nice she looked in her toga.

"We really have the same mission in life; so perhaps we really should get along better." Agape was so right on this one. What an embarrassing thing it has been having the same name "Love" as translated in many languages, but the two of them were not getting along:  Ironic, to say the least!

"Agape," Eros interjected, "you know that so many think you are the highest type of love, but without me, a lot of people who talk about you would be not very loving at all. They'd be frustrated and up tight all the time. They'd all be at each other's throats in less than a month without my influence."

"Okay, Eros," she said calmly, "but you must realize that I am not the one that makes all this stuff up about me being higher than you. I am not out there upgrading my reputation! It's sort of like the opposite of slander. Slander and Adoration are part of the same coin. This coin, no matter how it is flipped, is beyond our control."

That day in a coffee shop in Argentina Eros and Agape created a dance called Tango as a way of showing their solidarity and affection towards each other. They decided that tango's rhythmic roots would come out of Africa and its melodies and harmonic structure would come out of Europe. This dance, tango, at that moment became sensuality combined with the best of the human spirit. From Tango, mortals would embrace in a way that even siblings embrace each other, heart to heart, and they would find themselves transported by and possessed by the beauty of the music. Tango became the celebration of movement, a walking embrace, the transcendence of sentient yet spiritual ecstasy.

Just about that time, the muse of dance, Terpsichóre, also avoiding the winter in Athens, showed up to play for Eros and Agape.  She was about to play the first tango on her harp, but said, "Wait!  You have to hear this instrument I found in the Reinland of Germany!"  She put down her harp and pulled out a squeeze-box from a case lined with purple velvet.  "It's called a bandoneón," she said.  And out from the crying bellows of the bandoneón, Terpsichóre played the very first tango.
Agape tenderly embraced Eros and he navigated her around the room as Terpsichóre led and inspired them in the dance that never had been danced.  The people in the streets of Buenos Aires started gathering, watching this incredible moment in human history.

Now you know the true history of Tango: The dance that Agape and Eros danced when they met in Argentina some years ago.
Special thanks to Ovid, who still inspires me to make up my own etiological stories.
Photo credit:  http://en.wikipedia.org/wiki/Eros
Art credit:
Posted by Tango Therapist at Monday, September 05, 2011

Email ThisBlogThis!Share to TwitterShare to FacebookShare to Pinterest
Labels: Fiction