Tango and the Music of the Spheres


By far one the most beautiful dreams I have ever had was after a class on musical transliteration.  We would have to hear music and then write it out.  I can tell you that I was not very good at this, and am proudly envious of Toby, my son, who can recognize exactly what note or cord is being played.

Anyway, one late afternoon following my music transliteration class, I took a nap.  I dreamed that I, along with an entire room of people, were watching the music of the universe as it expressed itself in matched colors and tones.  The room was filled with rainbows, and we were doing our best to write down what we could get.  No one could get it all.  But we did our best.  We were all deeply in awe.

I did not wake disappointed but happy that somehow I saw the truth.  That God's universe is out there and we are just doing our best to piece together what we can understand.

But imagine living in a world in which harmony presented itself everywhere.  A planet, moving along a finite path had its own own tone or group of tones.  This was the music of the spheres.  At the time there were 8 planets and they all were attached to a certain moving sphere.  The movement of each sphere had its own musical expression. 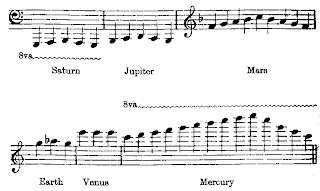 I don't simply believe in the "music of the spheres."  I know about it.  I was there.  I saw it.  And I experience it in tango all the time with my own tone and my partner's musical tone.

My compañera (the one who accompanies me in this path) has more than just a sense of the music playing as we dance, but perhaps even a sense of the the music of the universe (musica universalis).  Maybe her vision and fine-tuned intuition pulls me into new dimensions of musicality.  Maybe the music so fully guides us both that our musical auras intertwine and take us both to a place that we may naively believe to because of the other, but it was really a higher sense.  Maybe we have our own musical combined musical tones or phrase, and when combined with each they create a completeness and a wonderful harmony.  At the end of such a dance, she might say, "You are such a good lead."  But it really was her; it was us.  When I tell her that I cannot take the credit, she discounts my statement as false humility.  But it is true.

The music of the spheres includes all objects in relation to each to other.  That great tanda was a whole universe orchestrated together in that moment.  It was "the music of the spheres."  Perhaps we should not discount ideas that Plato so readily believed.  Perhaps this early cosmological theories that entwined astrology, mathematics and music should not have been so fully discounted.  I have chosen to join the Renascence Mind.  I hope you will join me. I promise you do not have to dress up for the part!

Email ThisBlogThis!Share to TwitterShare to FacebookShare to Pinterest
Labels: Existential, Feeling over showmanship, Teachers and Teaching