The Red Card at the Milonga 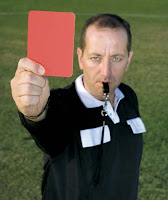 I have three ideas that will certainly stop the mayhem on the milonga dance floor.  By "mayhem," I mean that people are routinely hurt from poor floorcraft at milongas.  Important hint:  floorcraft has nothing to do with witchcraft.  The last idea (solution three) is a time-tested method which is used in Buenos Aires.  See this link for a woman's view of mayhem:  http://mytangodiaries.blogspot.com/2010/03/surveying-damage-floorcraft-rant.html

Solution one:  The "Red Card Milonga."  In soccer if the referee gives you "the red card" you are out of the game.  I do NOT propose throwing people out of a milonga, but I fancy having merely a single "Red Card Milonga" a month.  Certain men would be sent special invitations.

Solution two:   The "Red Card Tanda."  How about a pre-milonga tanda that has different partners with every song? Men move forward two women between tangos. When there are bumps or bruises one stops and holds up a hand.  Red card.  Referees circulate quickly giving out yellow cards when both men hold up a hand and point at each other.  To keep the tanda full, no one is made to sit down. The song ends; each man moves forward two ladies. No tally is made but it become clear who is a champion tango-card collector.

The Green Card
Every man is green at tango for the first year.  So he should never be given a red or yellow card.  With one exception:  Red if he the injury he causes draws blood, yellow if a person injured screams/moans in pain from the pain the Green Man causes.

The Pink Card
It is fairly rare, but woman can be either accomplices or fully at fault for unnecessary pain on the dance floor.  The Pink Card, for example, can be "earned" by doing high boleos when a slight boleo was led.

The White Polk-Dotted Card
This card is white with polka dots because of Bonnie and Clyde's white sedan with bullet holes.  (The polka dotts signify the homicidal feelings that are repressed about the pain caused.)  This is the only shared card.  Sharing is usually a thing God wants.  Not in this case.  I had a foot barely miss my FACE in Denver.  Whoa, Nelly.  Women are not puppets they don't even have to do that dangerous boleo or what-the-hell-is-that karate kick.  In some countries stilettos need a concealed weapon license.  (Not really, but that sounds good, doesn't it?)  Those stilettos can cause scars.  Did he really force your hand (or foot) on a tight dance floor?  The lady may unwittingly or wittingly become an accessory to the crime.  Thereafter a woman has the right to avoid a dancer who attempts to use her as his weapon of mass destruction.  Which brings us to the card that the person receives for causing the most mayhem of the night ...

The George W. Bush Card (also known as the WMD Card)
The Dancing WMD (weapon of mass destruction) deserves the infamous George Bush Card.  However unlike George W. Bush's hunt for WMD, these weapons are found at some milongas regularly.  Unlike Saddam Hussein, the tanguero who earns this card may actually be a nice guy.  Maybe he's the guy who has two kids.  Works hard.  Funny guy.  We all really like him.  We would not want to shame him publicly.  So we would never give out this shameful card, but at the end of the night he truly has earned the WMD Card -- often without even knowing it.  Look at what has happened:  He constantly bumped into others.
The winner of the WMD Card is also one of the most talented dancers.  Yet, he has demotivated not only women but other men.  The new tanguero -- heck any tanguero -- may feel that he cannot protect his lady.  New tangueros may feel inadequate by the "great dancing" of the guy who hurt his lady.   Others know and like the showboat tanguero and put up with him.  Even on a no-injury night, he has disturbed others' magical moments of musical freedom and embrace.

The third solution: Let's call this solution, the ...

No-Fault Card Solution
The rule in Buenos Aires (although not always practiced well) is old-world civility at its best. The gentlemanly milongueros apologize even if they did not cause the accident.  They pull out the No-Fault Card.  This does two things.  First it stops the action and acknowledges a foul.  In a game that no fouls are called, the fouls increase.  Secondly, stopping to apologize tells the ladies that they are dancing with gentlemen.  It teaches the Green Man or WMD Man (or whoever) that what just happen is not cool.  It's a foul.
So in case anyone thinks that a Red Card Milonga might appear soon in Austin, Texas, let me say clearly:  Solution number three resolves the issue.  In a dance that is lead and follow -- the true gentlemen tangueros will lead and others will follow. 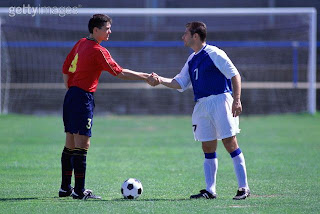 Email ThisBlogThis!Share to TwitterShare to FacebookShare to Pinterest
Labels: Humor, On being a man, Tango Etiquette