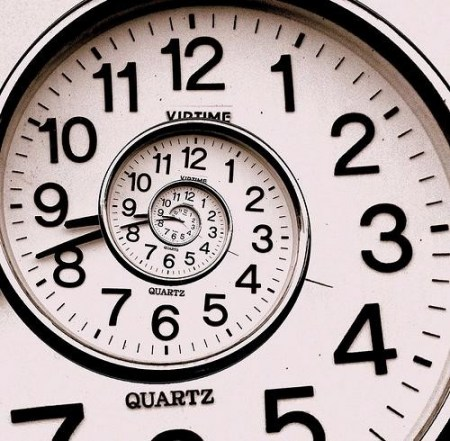 Tango can play with your mind--a mind that has the tendency to erroneously perceive that time is going faster and faster as one becomes older.  I can think of nothing better than tango to reverse this false perception.  Tango can be practised as a time-warp laboratory in which time can be put into slow motion--still a false perception, but preferable.

Before starting tango, I created a reframe and reverse the psychological phenomenon that made time seem as if it goes faster as we become older older.  I was especially influenced by my private music teacher who was always bemoaning how he was getting so old. When he turned 30, I was half his age, and he spoke as if he nearly was in his grave.  Even as a teenager, I saw his complaining as a funny paradox, especially as he complained to people much older than he.

One really can make time go slower by just reframing sayings, such as: "Wow, the year went by so fast!"  How about just saying, "It seems like a century since we celebrated New Years Eve together." And then it does feel different because we could then consider how much really had indeed changed. Time goes so slowly if you only will allow it.  Since time is even more flexible on the physical world than we every believed before Einstein, the psychological world of time is exponentially more flexible than the physical world.

Tango has allowed even a more wonderful time-warp lab experiment with some partners.  It all started with a friend, Martina, who mentioned that a tanda had slipped away so fast.  I recommended that we dance the next one with the idea of slowing down time.  It immediately worked, and it changed my dance too.  I now am more likely to enjoy a slow motion part of a song, especially with the singer or any melody.  Sweeping strings that we embody in dance also slow down time.

I recommend saying to special partners:  "Let's dance in such a way as if to slow down time." Since I started doing this, sometimes a tanda goes on for "an eternity in heaven."  And if we can make a tanda seem like the four seasons of a year, then we can begin this practise with other small things.  The "Kingdom of Heaven is in your midst," said a very obscure Galilean Prophet. Few have taken him seriously.  Now is eternity, and in some measure we can practise this in everything, but tango is the best place to start.

Join me and watch the centuries roll by--one tanda at a time.
Posted by Tango Therapist at Saturday, October 18, 2014