Music: Not a Spectator Sport


Sitting and listening to music is stressful.

Okay, it can be kind of nice.

If you are absolutely exhausted.

Having a broken leg is also a good excuse to sit and watch music.

It's rumored that one of the worst torture techniques used during the Bush administration was tying people down and playing tangos until they lost their minds.

As I was a musician, I didn't understand that I was a dancer inside.  I hardly could stand watching people playing music.  I felt I had to do something.  But I thought it was that I merely wished I was playing instead of watching.   But now I know what it was.  The "Do something!" that I felt inside was to dance.  I thought for years that I was impelled to play music, but what I really needed to do is get up and dance.  At the time I just did not know what was going on inside of me.

In 2007 I was playing Latin percussion along with a salsa DJ.  I was in heaven.  Playing music.  Nirvana.

Then a salsa came on and I put down my timbale sticks.  Sure, I  could have played the tune, but I just had to dance.  That's the day I realized something I really did not know:  Dancing is a higher level of Nirvana than being a musician -- at least, it is for me.

If it is true that music is not a spectator sport . . . then tango teachers really need to do a better job at changing the way they teach!  We are torturing all those tangueras by having them sit way too much.  Most don't have broken legs, I have noticed.

The gender imbalance is a complicated issue, but there are solutions.  Part of the solution would be to stop the blame-game-tango-teaching against men that goes on presently.  Here are a few solutions:

No-blame dance instruction would revolutionize tango.  Too many women are sitting for a very good reason.  Let's fix it instead of blaming this problem on men.

It may feel to women that the man led so perfectly, that she "merely" followed.  Not true.  It may feel to the man as if he really had really led the dance when it goes well.  Not true.  Think about it:  Surely, there are times when a man has done his very best, and the dance was not magic.  Perhaps the music the DJ put on really didn't lead the partner well because the DJ plays for himself and not for the dancers.  Perhaps the woman was not present -- looking at the mirror or at who was watching.  Perhaps the man was nervous, thinking that he is finally dancing with a woman who never had looked his way, and he is trying to show her everything he knows.  He "dances" well, but it doesn't go with the music.  Perhaps, he is angry and distracted by a tanguero who has put his partner in danger a few times, and he's contemplating how he should end the evil tanguero's life in a tango fight, just like the old days. :-)  At the end, the man led.  She followed.  But they had a torturous dance.  The music must lead.  WE must follow.  The music entertains us, not each other or the audience.  The music itself is a mix of notes and rests; so are we -- a mix of yin and yang, a mix of notes and rests, a mix of male and female. 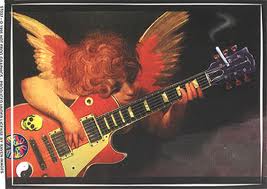 Music is central.  Without it there is no dance.  Music is not a spectator sport:  It is la voz de los dioses.  When the music plays it leads us to get up and dance.  Just don't stop there.