Heartbreak Milonga and the Tango Tomcat 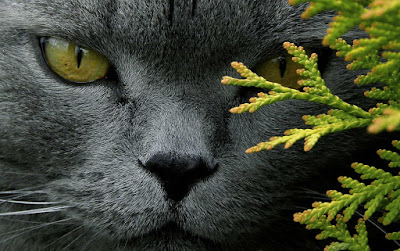 by Cassiel.  Translation from German by Mark Word.
Recently, on the edge of the dance floor, I spot a tanguera (we shall call her simply "Eleanor") who bravely sat bolt upright in her chair and looked blandly through the dancing couples. It seemed as if she were not really present. Her face betrayed no emotion. An attentive observer could only imagine what was going on in her thought. To truly get a glimpse of her newly acquired personality, one would have to be aware of her history with Kasimir, the Tango-Tomcat.
You see, only a few weeks ago, Eleanor was still Kasimir's favorite tanguera and he danced almost exclusively with her. But now she has been replaced with the next tanguera in the line of waiting ladies. Eleanor's new role tonight is just to watch as she is deprived of the favor of the gato-maestro's hold. Currently at the front of the line is -- we'll call her "Cutie Pie" -- who is glad to be the present favorite of el maestro, el Gato de la Noche.

No question, Kasimir is a good tango dancer, and he knows it. He had enough time to perfect his skills and has had the opportunity. Kasimir is open, loose and often a little too loud. He is the heart-throb of many women. If he enters into his carefully composed exterior of a milonga, then his appearance has something messianic. Kasimir occurs in different outfits. Sometimes he appears in a bright suit, the sunglasses in his hair, and sometimes he comes dressed in extremely casual sports clothes. Then again, he sometimes is almost inconspicuous in jeans and T-shirt. Many ladies watch him with longing eyes. Kasimir seems to have trained long and hard to ignore the swooning observers. But perhaps a careful view of him would reveal the restlessness of a troubled soul. He constantly scans the environment and controls the performance of his carefully crafted persona, which must be exhausting. But he is well aware of the power of his persona, his mask. In the same way, he moves navigates over the dance floor waves: His leadership is pervasive, effective and controlled. But there is a question if his control matches the music. Although this lapse is hardly discernible, the careful observer can see it: It's the moment in which the music betrays his stormy inner life. One will see Kasimir at a loss during a tango when the music offers a motionless waiting, a stillness upon the dance floor sea. He seems not to be able to endure self-reflection.

Just one of many
But we'll come back to Cutie Pie. Also waiting in the line of ladies is Lucinda, who presently sits and hopes for her chance with Kasimir. Having completed his round of jovial, friendly, professional greeting, Kasimir finally comes around to her with an outstretched hand to her and asks for a dance. He dances with her tanda after tanda. And she sinks in the happiness of the moment, not knowing that this happiness will find itself with a high probability in the same trash heap of those who went before her.

And what do all the tangueros make of this? Surely some Tangueros undoubtedly will wonder how Kasimir does it! How he so effortlessly captures the favor of the ladies! Is it his verbal wit or maybe it's his physical aura that grips the ladies? But the mystery remains in Kasimir's little box of catnip secrets.

I should mention another unfortunate feature of his personality: Beware of his territory marking. Let's just call it peeing on your leg. As a leader of the cat-pack, he claims the alpha position in a group. If a lesser tango-gato dances too long and too intimately with a tanguera, he must confront them on this rather forward behavior. He must defend his role as leader of the cat-pack. As in the wild, so it must be at the milonga! His dealings with other tangueros are rather difficult. Somehow, he very often gives the impression that tango-size does matter with his not-so-hidden "length comparisons." It's all so tedious.

Maybe we need to describe a few archetypes of hopeful and ultimately disappointed tangueras from his past so that the phenomenon is more tangible in order to understand a persona such as Kasimir. First let's mention "Fanny, the frustrated": She has sworn him off after her great disappointment with the Kasimir -- her tango also died too. Then there's "Farah, the Furious": In her sense of him nothing that would be positive to say of Kasimir. But it has had a larger toll on her too, as seen in her tango, which has become noticeably more performance-focused and more hectic. (For her the world of a tango of feeling has replaced itself with a tango of outward perception.) And that brings us finally to "Ina, the Indolent": For ages, she has continued on apparently without any heartbreak. She, like a French wife of a politician, stands in solidarity with Kasimir and his current mistress, hoping that he realizes one day that she is the only true adoring one.

Is there hope for Kasimir? This question is not easy to answer. Certainly, it will be difficult for him to leave the hunt of the latest Kitty even though this hunt leaves marks upon his soul. Precisely for this reason, his great performance slowly seems to have become more hectic. Perhaps he will find that the tango social milieu is not an endless ocean on which he can sail his pirate ship. One day he will find that the waves he has made upon his own tango ocean will have him upon the rocks. A cold and wet Kasimir then hopefully will get to know the real world of tango, the silent and peaceful sea of tango. Maybe he can find social tango--one of connection with another soul.


Translator's note:  Since this was written, the tango community in this town was totally decimated. It's rebirth will be contingent on the love of tango as a community and a bit of wisdom.

Cast of characters in their appearance in this drama:
Eleanor
Cutie Pie
Lucinda
Fanny
Farah
Ina


PS: Hats off to Cassiel. I ask his forgiveness with some of my freedom I took in a few places in the translation.
Posted by Tango Therapist at Saturday, September 10, 2011

Email ThisBlogThis!Share to TwitterShare to FacebookShare to Pinterest
Labels: Teachers and Teaching